I should have known by the way March 1 began that God had an amazing day in store for me!

I mean, how often do I get to worship on the rooftop of a hotel in Jerusalem? Capturing this sunrise was an unforgettable moment! Before I explain how the rest of the day went, I will first share some exceptional views from various places I visited in Israel. Although the country is small in size, I didn’t see everything in my eight days of touring; therefore, I must return! 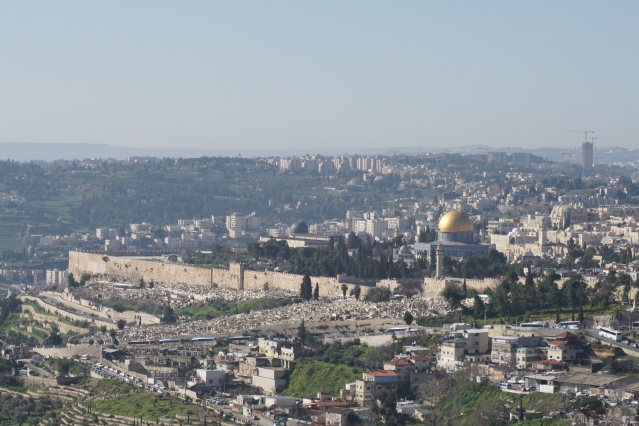 Here we enjoyed a vista of the Old City from Mt. Scopus. So this is Jerusalem!

The peaceful setting at the Mount of Beatitudes and the boat ride across the Sea of Galilee were intoxicating.

The views from Masada granted me a first-time experience of looking down upon an aircraft in flight while my feet stood on solid ground! This plateau in the Judean Desert houses remains of King Herod’s fortress. 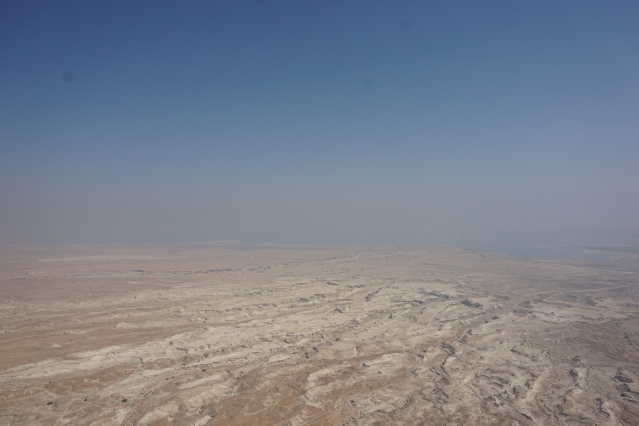 Views of the Dead Sea from Masada. Enough sightseeing! It’s time for the beach!

Kalia Beach offers up the opportunity to get caked in mineral rich mud and to wash off while floating in the Dead Sea! I totally would do this again!

I’m pleased with my mud application! Not bad for a newbie! The trick is to let it dry for about ten minutes. I wish I had been brave enough to do my face, but I didn’t want to chance getting Dead Sea water in my eyes! Our guide, Amir, warned us of possible blindness! He was kidding, of course.

Back to the exceptional views: had there not been hazy conditions, we would have seen all of the Jezreel Valley and the Mediterranean Sea beyond it from this beautiful mountaintop called Mt. Carmel.

Ah, The Mediterranean! Who knew that these waves wash up pieces of marble that came from structures built 2000 years ago by King Herod? Caesarea grants beautiful vistas and a functional amphitheater for hosting a church service with Pastor Joseph Prince from Singapore. Yeah, we did that! In fact, our celebration of Jesus took us to many outdoor venues where we sang His praises! 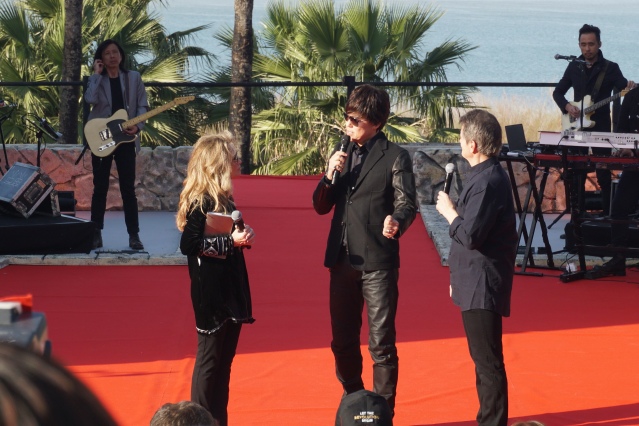 On the shores of Galilee…

On the Southern Steps in Jerusalem… Talk about a view! Pastor Prince stated from the Scriptures, “Jesus went up to the Mount of Olives,” and I turned my head to the left to see that exact place! When will that ever happen again in my life? I’m not sure it will!

At the Garden Tomb… Here we participated in communion and worshiped our Risen Lord and Savior! On that note… the visit to the Garden Tomb happened a couple of hours after I captured sunrise over Jerusalem. Little did I know that a revelation as great as the light of day awaited me here.

I’m about to go into the small and empty tomb that is believed to be the site of Jesus’ burial. As you can see, I’m giddy with expectation. 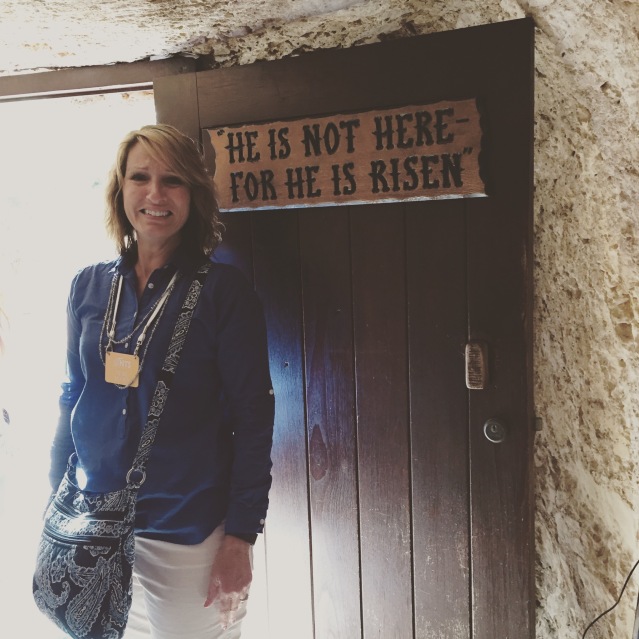 As soon as I stepped into the tomb, I began to weep. Through tear-flooded eyes I looked into the dimly lit space to fix my gaze upon the stone bench. An empty stone bench. Jesus was once buried in a tomb cut into a rocky cliff, but on the third day He rose again, just as He said He would do! While I stood in this very site, I thanked the Father, Jesus and the Holy Spirit! I could not stop celebrating!

A new mantra overflowed from my heart- “Resurrecting” by Elevation Worship. I kept repeating the chorus, “Your name, Your name is victory. All praise will rise to Christ the King.”

I want to revisit with you the day when praises were rising in the streets of Jerusalem to Christ the King. What we now call Palm Sunday marks Jesus’ triumphal entry into the city. The people received Him and celebrated His coming. Well, most people did. Luke 19:37-40 records,

When He came near the place where the road goes down the Mount of Olives, the whole crowd of disciples began joyfully to praise God in loud voices for all the miracles they had seen: “Blessed is the king who comes in the name of the Lord! Peace in heaven and glory in the highest!”

Some of the Pharisees in the crowd said to Jesus, “Teacher, rebuke your disciples!”

“I tell you,” He replied, “if they keep quiet, the stones will cry out.”

Fast forward five days, and Jesus, having been charged by the Jews for blasphemy and sentenced to die by crucifixion by the Romans, goes to the cross. He suffered much anguish, mockery and injury in the hands of all. He suffered unto death for the sins of all. I imagine that the voices of the faithful went quiet in that moment when He released His spirit and died. What happened to Jesus becoming our conquering king, they wondered… Scripture seems to say that creation will not stand for a void of praise to God. “At that moment… the earth shook and the rocks split. The tombs broke open and the bodies of many holy people who had died were raised to life” (Matthew 27:51-52).

Heaven’s victory demands creation’s praise! You see, there is one “defeat” more triumphant than the greatest of all victories the world will ever know- and that is Jesus Christ’s resurrection from the grave!

And here is what John, a disciple of Jesus who witnessed His crucifixion and death, wrote at a very old age- a vision presented by Jesus Himself of the happenings in heaven. You know the book as Revelation. John knew it as an exceptional view from an elevated place.

Then I saw a Lamb, looking as if it had been slain, standing in the center of the throne, encircled by the four living creatures and the elders. The Lamb had seven horns and seven eyes, which are the seven spirits of God sent out into all the earth. He went and took the scroll from the right hand of Him who sat on the throne. And when he had taken it, the four living creatures and the twenty-four elders fell down before the Lamb. Each one had a harp and they were holding golden bowls full of incense, which are the prayers of God’s people. And they sang a new song:

“You are worthy to take the scroll and to open its seals, because You were slain, and with your blood You purchased men for God from every tribe and language and people and nation. You have made them to be a kingdom and priests to serve our God, and they will reign on the earth.”

Then I looked and heard the voice of many angels, numbering thousands upon thousands, and ten thousand times ten thousand. They encircled the throne and the living creatures and the elders. In a loud voice they sang:

“Worthy is the Lamb, who was slain, to receive power and wealth and wisdom and strength and honor and glory and praise!”

Then I heard every creature in heaven and on earth and under the earth and on the sea, and all that is in them, singing:

“To Him who sits on the throne and to the Lamb be praise and honor and glory and power, for ever and ever!”

The four living creatures said, “Amen,” and the elders fell down and worshiped (Revelation 5, NIV).

I can’t express enough the victory of the Lord Jesus Christ! “See, the Lion of the tribe of Judah… has triumphed” (Revelation 5:5). And, we, who are in Christ Jesus, are victorious! Why? Because, “God raised us up with Christ and seated us with Him in the heavenly realms in Christ Jesus” (Ephesians 1:20-21).

Time to celebrate and worship with abandon, dear friend! Jesus has overcome it all!