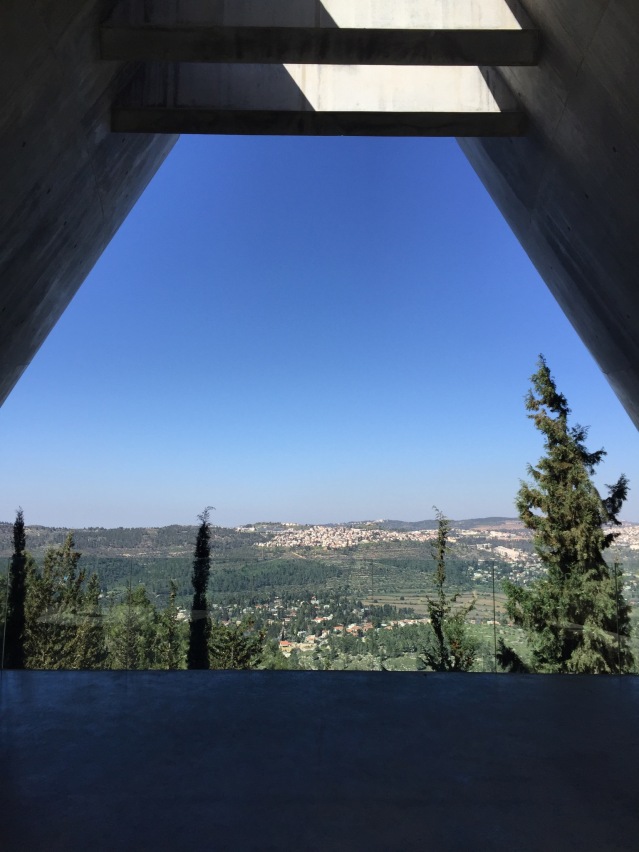 Jon and I recently visited Yad Vashem and know the impact it can have on the human soul. Grief, sorrow, anger… all are normal emotions visitors encounter as they walk the sacred rooms of the museum. Another welcomed result of the ongoing collection of data from the Holocaust is the sense of hope- hope that the travesty of a multi- million human slaughter will never happen again.

I realized my personal response to the factual presentation of Yad Vashem early in my travel through the museum: Humility.  I didn’t see the ill of one man and his followers; I saw the potential of a degenerate heart. You see, a heart left to its own sovereign rule creates rules to live by that satisfy its evil nature.

What causes fights and quarrels among you? Don’t they come from your desires that battle within you? You want something but don’t get it. You kill and covet, but you cannot have what you want (James 4: 1-2).

I found myself quietly asking God to forgive us as I moved from one exhibit to another. Forgive who, you ask? To forgive us, mankind, because we reap destruction as a result of being held captive to the stronghold of sin.

The following is my understanding of the human nature that, left to its bondage to sin, is a destructive force producing cause for much sorrow. Pride is the root of these thoughts that lead to attitudes, and eventually lead to actions. Basically, it’s an Us vs. Them mindset. You can find Us vs. Them in every facet of society: In the workplace, in status groups within a community, on school campuses, in political parties, and, sadly, among church denominations. It invades in an undetected state and pervasively spreads until it dominates its host. Not only does the victim speak of his superiority over another, but the actions prove what his mind believes.

Us is determined by the polarization with which the individual identifies himself, and anyone outside of the characteristics of Us belongs to Them. Them is always lesser. To understand Them, typically one or more traits is assigned to the group and its adherents. So, with a quick analysis the mind assures the assessor that the other group is properly defined, and as suspected, they are not worthy of association with Us.

Hate easily latches on to pride, as you can well imagine. Us vs. Them is careless thinking; it forms dangerous attitudes. Us vs. Them guides the prideful into the unthinkable. Yad Vashem proves it.

Who can save us from ourselves? We fall into such thinking mindlessly. We have partnered with darkness in an attempt to strip the value from others- the intrinsic value that each human has for the sheer fact that he was made in God’s image, and his life is sacred!

Jesus is our only hope! In love He came. In love He revealed the Father in heaven and His good plan for the world He created. In love, Jesus went to the cross and became intimate with its humiliation that was meant for the sinful. That was my cross; that was your cross. Though He was sinless, in love He suffered, and His blood shed unto death made payment for all sin, for all man, and for all time! Sin has been paid IN FULL!  In love He rose victoriously to life and returned to the Father in heaven. Now the Holy Spirit beckons each man, woman, and child to put their faith in what Jesus has done, so that each of us can receive the benefit of His forgiveness of sin- an eternal life with Jesus and God in heaven and a temporal life knowing more deeply every day the love and attention of our heavenly Father.

How do we put a stop to Us vs. Them? How do I overcome my natural tendency to make stereotypes and divide people? The love of Jesus embraces me and welcomes me into Father God’s collective whole: The beloved of God! Jesus prayed about about this hope:

My prayer is not for them alone. I pray also for those who will believe in Me through their message, that all of them may be one, Father, just as You are in Me and I am in You. May they also be in us so that the world may believe that You have sent me (John 17:20-21).

This Easter season, before any of us expunge our record of sin by acknowledging we’ve never been a thief or a murderer, let us keep in mind that the eye of God sees into the heart and knows fully the secret things held there. I may not ever have committed an act of murder, but because I have had a hateful thought toward another, that is the mindset of a murderer (See Matthew 5:22). And you have done the same. Therefore, all of mankind belongs to the biggest Them group to ever exist: Sinful humanity. Praise God that He loved us too much to leave as such.  Because Jesus came in love and took the cross that was for each of us to bear, He bridged sinful humanity to holy God, and now we, who receive the grace of complete forgiveness, are One in His perfect love.