The Enemy Snuck In 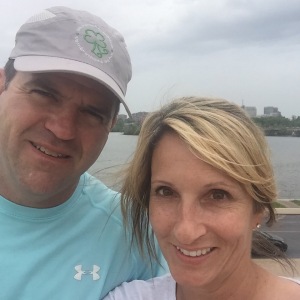 Jon and I had the opportunity to get away last weekend and take in the sights and sounds of D.C. and Baltimore. By sights I mean we had a running date in Georgetown along the Potomac River, and sounds included the amazing talent of our daughter and her peers who participated in the Potomac District Fine Arts Festival in northern Baltimore. So, we enjoyed some time of marriage building and being those obnoxious parents who cheer loudly for their kid!

I don’t know how you feel about I-95, but, in my opinion, it is a menacing corridor through D.C. and the northeastern cities. The traffic! I just can’t get used to it! And I wasn’t even driving! Jon did all of it, and since I’ve been his passenger for almost thirty years, I’m more than confident in his skill behind the wheel. But something had me unsettled last weekend as we traveled to the nation’s capital.  I kept wincing and crying out every time I feared a car was about to ram into us. Jon was very patient with me, and even jokingly cast the demon of fear out of me while we were in route! He laughed, but I think he was on to something…

I was being tormented with fear and excusing my lack of peace because the traffic was something I was not used to encountering. I excused my fear…

How I love my faithful Father in heaven! He was not going to allow me to camp out in that irrational fear any longer. By time we returned home and I taught a life group message the next day, He gave me truth that spoke to the fear. And this truth came directly from my own mouth during the lesson!

“All the people in the synagogue were furious when they heard this. They got up, drove Him [Jesus] out of the town, and took Him to the brow of the hill on which the town was built, in order to throw Him down the cliff. But He walked right through the crowd and went on His way” (Luke 4: 28-30).

How did Jesus escape the angry crowd’s intent to kill Him? It was not yet His time to suffer and die! Jesus didn’t run away in fear; He walked right through the crowd…

In the same way, I can expect God’s divine purposes and protection. I am His child. What have I to fear? He is with me and is ordering my steps! What God has purposed me to do will come to pass!

After life group, I went down to the sanctuary to hear my pastor preach about fear in the light of God’s Word. He read Psalm 91 in the Message translation, and we all got blessed!

“You who sit down in the High God’s presence, spend the night in Shaddai’s shadow, Say this: ‘God, you’re my refuge. I trust in You and I’m safe!’ That’s right- He rescues you from hidden traps, shields you from deadly hazards… Evil can’t get close to you, harm can’t get through the door. He ordered His angels to guard you wherever you go… ‘If you’ll hold on to Me for dear life,’ says God, ‘I’ll get you out of any trouble. I’ll give you the best of care if you’ll only get to know and trust Me…'”

By the end of the message, Pastor Jim was leading his flock in declaring, No more! We severed all agreements that we had made with the enemy, thereby evicting him from our hearts. We recognized that we exalted something or someone above God, and Sunday, April 24 was the day of cessation.

Let God be exalted and His enemies scattered!

← Get Out of That Funk!
Perseverance Makes Faith Productive →